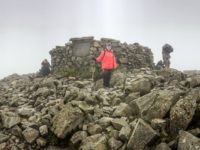 All posts, Hiking and walking
From the series The Wainwright Fells

As you may know, I’ve long been a fan of the English Lake District. Since visiting in the 1990s and, in particular, since starting to hike in earnest, the high country in Cumbria has drawn me whenever I’ve had the opportunity to visit. The Wainwright Fells are the main draw: a collection of hills and mountains which Alfred Wainwright “bagged” and illustrated, and about which he wrote his famous series of books.

The biggest of these fells is Scafell Pike, which is also the biggest mountain in England. Although I realise that their distance from my home and only restricted opportunity will probably stop me from ever getting to all 214 summits on Wainwright’s list, I’d like to try and get to as wide a selection of the most iconic and photogenic ones as possible.

The most popular route is from the remote hamlet at Wasdale Head, to which I first came in 1996 on a grey and wet day. Despite being somewhat remote, the path from the valley floor leads up the western flank of the twin Scafells with the least ado, which makes it the choice of those who take part in the Three Peaks Challenge. This proved itself on the day we visited by a small fleet of minibuses spewing pumped-up participants, which arrived during the precursor to a storm as we limped back to the car after our own efforts.

Despite the considerable physical exertion, the main apprehension before the walk came from the fact that the National Trust calculated how 100,000 people scale Scafell Pike every year: getting on for 300 people every day. Both Jo and I revel on empty mountainsides and in peaceful hiking, so the prospect of slogging along with loads of other people wasn’t great. But as it turned out, we only saw a few other couples and small groups throughout the day.

The first two-thirds of the route aren’t especially difficult but a continual uphill trudge, interspersed with a few steep sections supported by diligently-maintained stepping stones. The views back across Wasdale and Wastwater are quite something when you stop to catch your breath, and the view from the path crossing Lingmell Beck around 1.5 kilometres into the walk is particularly photogenic.

The hike to the top of Scafell Pike and back entails 900 metres of ascent and descent over the total 8.5 kilometre distance, so it’s best to take your time. Three Peaks participants are the ones with the challenge, as they’ll be pushing to complete the final mountain of their set within an allotted time limit. The worst section of the route is definitely up past Lingmell Coll to the summit plateau. It’s from here that the rocky terrain can be especially tricky – especially because of the anticipation of achieving your goal.

It’s for this section – both in ascent and descent – that you need to save your energy. We were egged on by the sight of two chihuahuas skipping gleefully from rock to rock on their way down, so we realised: if they can do it, so could we.

The summit plateau away from the summit cairn is a maze of small rocks but otherwise featureless, so we paid particular attention to the easily-lost route as the clouds and mist came and went and came again. The last thing we wanted after such an exertion (and before the taxing descent) was to head down in the wrong direction. It was a great feeling when we got to the summit cairn, despite the fact that the clouds obscured much of the view, and a howling wind meant that after we stood on the artificially-extended highest point in England, we had to take shelter in the lee of the large stone edifice for our rest and lunch.

Although the walk up a mountain is taxing and hard, the real effort is often required during the descent. Having used a lot of energy to get up to the top, fuelled by our regular mix of fruit, nut and chocolate, the descent proves harder because of stepping down all the way – often from rock to rock, with constant, repetitive impact on your leg joints. I strapped my knee up with a sports support for the descent, but despite this, the massive exertion took its toll by the time we’d crossed Lingmell Beck again. The views across Wastwater to the Irish Sea kept our gazes occupied on each of our many breaks on the way down, and the light ranged from grey and flat to a soft orangey glow by the time we returned to Wasdale.

The walk was incredibly hard work and is reputedly the most difficult of the three highest British peaks. Our achievement proved to me that I’m capable of much more than I’d previously thought. It also showed me that psychological energy – the will and drive to want to enjoy the hike – forms a critical part of the success of any long, difficult hike. In comparison to our walk up Ben Wyvis in Scotland, which I was less keen to do, I found this walk much less taxing, if certainly not easy.

The affirmation of our walk to the top of England has proven helpful since returning home, when I’ve tackled a couple of other big, challenging walks. I have succeeded each time because I knew before I left home that I was in the right frame of mind to spend all day slogging up to the summit of the hike and back again. Without this, I now know, a hike is much more likely to be unsuccessful and much more of a slog.