Take the Rosengarten park in Bern as an example. The park is situated at the top of a steep hillside facing the old city of Bern, and is a popular destination for tourists and locals alike. You’ll often see cameras blooming here: the view across the meandering Aare valley to the historic UNESCO site is one of the best in the city.

I’ve been to the Rosengarten many times. By taking my time to properly assess the view at different times of year, and by being really finicky, I’ve found that there are two optimal viewpoints from which to photograph the view.

The first is actually not in Rosengarten, but at the junction of Lerberstrasse and Aargauerstalden: roads below the park, leading down the hill. There are no trees in the way from this point and the camera is at approximately the same height as the city’s winding rooftops, meaning that extra-wide angle views aren’t distorted. This spot is also a little nearer the city, allowing slightly more detail in the same number of pixels. 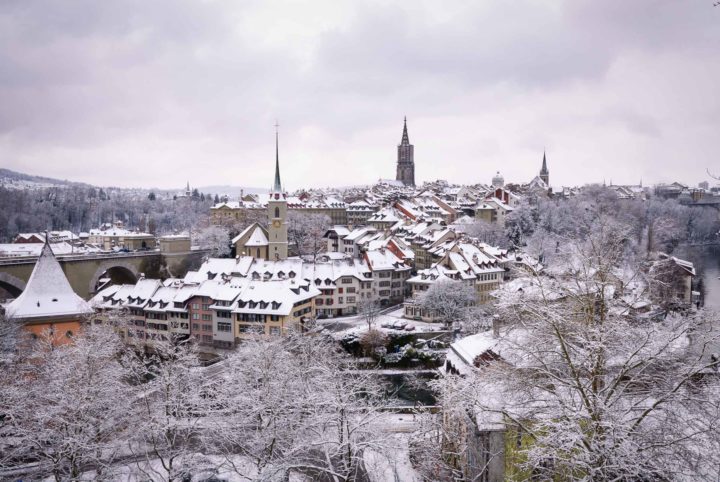 The second view is from the upper level of the Rosengarten; not quite at the park, but along the footpath leading down to Bärengraben. A hundred metres or so down the path is a house with a garden. The view towards the city from the point where the garden meets the rose beds is clear of any cherry trees. A wider-angled photo from this spot is nicely framed by two of the trees, which provide foreground interest when the trees are in bloom (or at least covered with foliage). The tower of the city minster can be nicely centred between the trees, too.

Nice little details from this point are the attractive curve of Nydeggstalden, leading up the hill; the inclusion of a stretch of the Aare river below Altenberg; the attractive angle between the Nydegg church and the Minster; and the inclusion of both the Untertor and Nydegg bridges in the image. This point is where all these elements are least obscured by large trees in the foreground.