There are plenty of mountains in the Bernese Oberland and many of them have easy access by road, by train or by cable car. But many more don’t, requiring more of an effort to get there. These are the mountains which give you much more of a sense of achievement to reach, and which are much more peaceful. Although you rarely get the sense of remoteness which you experience when on mountains in Scotland or Wales, it’s lovely to be on top of a mountain with terrific views after getting there under your own steam.

One of the most identifiable pinnacles in the area above the Lauterbrunnen Valley can be seen from many miles away and although it’s not one of the taller peaks, it’s one of the most distinctive. The multiple pinnacles of limestone called Lobhörner look, from a distance, like a foot with toes sticking out of the surrounding mountains. I’d done some research online but there is a range of conflicting information about the hike to get there, so we chose to get up to the Lobhorn Hut and decide from there how far to continue. 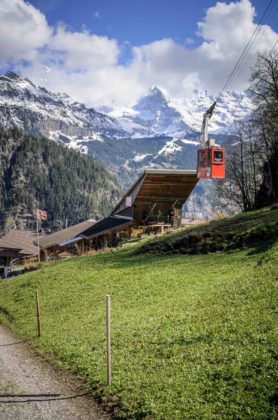 What was certain was the starting point at Sulwald, reached via a short ride in the tiny cable-car from the hidden hamlet of Isenfluh above the Lauterbrunnen Valley. From Sulwald, a steep path leads up into the mountains, over which we took our time thanks mainly to the steep route and occasional high steps made out of the trunks of felled trees.

I’ve always wanted to hike up to the pinnacles of rock themselves, but I’ll need a little patience and more training before achieving that goal. Despite the photographs on the website of the Lobhorn Hut and a couple of indications that the peaks are only two hours from Sulwald, they prove to be 700 metres above and around 3 kilometres beyond the hut. As is always the case when hiking more distant routes, the main issue isn’t so much walking to the destination, but having to take the return route into account. So we curtailed our route this time and after I got the photograph I wanted–the main one in this blog post–we continued to a viewpoint at the base of Höji Sulegg, around 520 metres above and 4 kilometres from our starting point. Despite tiredness and the first aches, the vertiginous view down the Syltal valley to Bönigen and Lake Brienz was well worth it and a fifteen minute break and some muscle-stretching re-invigorated us for the walk back down.