All posts, Life (and how to live it)

I was a bit trepidatious about tackling one of the more challenging hikes I’ve planned, but Jo gave me the encouragement I needed and so we took the ship across the lake last Saturday. After taking the funicular up to Beatenberg, we headed west along the outskirts of the village to hike up the steep, winding path through the Howald forest between Beatenberg and the summit of the Niederhorn.

For that reason, I wanted to see the route which Jo takes and so I set myself the daunting challenge of 826 metres of vertical ascent (just over 2,800 feet in old money) and a total distance of around 5 kilometres. I’ve never walked up such an incline before and so I knew that it was going to be a challenge.

Once I’d gotten past the initial struggle of being out of breath for the first time during the hike, I stopped to take a photo looking back towards the Niesen and to Faulensee before settling into what I like to think of a “Swiss rhythm”: slow, short and regular steps. This technique ensures that you don’t get out of breath so much and also helps you to avoid over-reaching when stepping up from rock to rock (or in this instance, from tree root to tree root).

The main part of the walk is through the forest and so there’s not much of the view across the lake to be enjoyed, apart from the occasional glimpse between the trees. We were saved such distraction for photo-taking by low cloud once we’d covered around a third of the overall distance, so we stuck to enjoying the forest wildlife and picking the odd bilberry, whilst making sure that we followed the regular red-and-white hiking path markers. Much of the forest is criss-crossed with what look like other paths, so the official markers are a great help to ensure that you don’t lose your way. 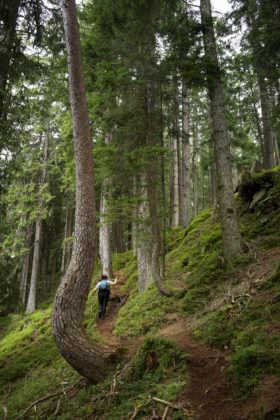 Jo and I also choose to use walking poles – a very un-British tactic, which many U.K. hill-walkers scorn – to help spread the exercise and muscle use throughout the body and to also help with stability on steeper, steeply-cambered or slippery sections.

The going is pretty steep for most of the way, so the steady progress helped to ensure better stability and to avoid over-stretching leg muscles early on the walk. With the danger of getting bored or frustrated, I made sure to just focus on the part of the path at hand and not consider how far it was to the top. Walking in the forest, where the view doesn’t change much, can be deceptive and trying to work out how much further there is to go can make the walk psychologically harder than it otherwise would be. Without the view off the mountain, it’s all but impossible to judge how high you are climbing; on the other hand, not being able to see how much further it is to the television transmission mast at the top also helps you to enjoy the part of the walk you’re on.

After around three hours, we reached the top of the forest section where the trees start to thin out and where cattle graze in summer and churn the ground up into a muddy surface. We were thankful for the steadying poles and also for the vague view of the huge tower nearby… albeit through fog thick enough to obscure both the huge vertical drop next to the path and the mountain-top buildings. 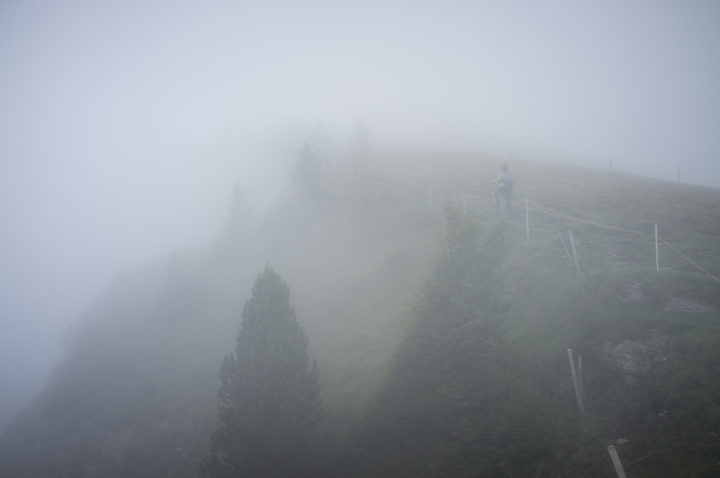 We reached the top some three-and-a-half hours after leaving the funicular station and although our walk had taken 40 minutes more to finish than the signs at the bottom indicate, I was delighted to have made it at all, with only tiredness in my legs instead of the anticipated muscle pain. It was a great experience and a great first “big” hike: one upon which I intend to build by adding the downhill walk, either all the way or to the half-way station at Vorsass. The success of this hike has been a great confidence-booster and a good sign that I am physically up to the challenge of some of the other long and steep hikes which I’ve had on my list of goals for the last couple of years.