Arriving in the village and seeing the sea for the first time of the journey, four hours or more from home. The creaky iron gate, a high step up to the end of the family friends’ steep path. The big kitchen with views of the fields and Live Aid on the television as we arrive. The familiar but long-unheard dialect, warm and welcoming and feeling like family.

The red sandstone earth on the track to the holiday home, with grass growing along its middle, where Dad once got the car stuck in the mud when there was a lot of rain. The squeaky iron gate with curling metal amidst the weeds, and the stepping-stone path through the daisy-covered garden to the little wooden veranda with small holes in where the wood-knots used to be.

The small, high bed with the plastic cover on the mattress in the tiny room behind the kitchen. The high, letterbox window with plastic-y curtains which didn’t keep out the light, and which didn’t keep me in when I was still small enough to get through it. Using a wooden chair as a bedside table. The cupboard in the kitchen, above the sink, open to the outside air on the back and covered with a protective mesh to keep the bugs out.

The plastic bath in the small bathroom out the back and its spindly arachnid inhabitants. The rusty hooks on the outside walls and the cold toilet seat; mercifully rarely in the middle of the night.

My sister’s room with two windows and a view of the beach; my parents’ room on the back with a wobbly bed frame, which we never went into. A big, old Ordnance Survey map pinned to the wall, with all the place names of holidays past and the familiar little key of sights to be seen. A cupboard, recessed into the wood-panelled wall, with green drinking glasses, familiar but unusual cutlery and plates, linoleum coverings on the shelves and a somehow comforting smell. The radio, poorly receptive, and the novel experience of two weeks without a television.

Walking up to the village shop in the morning to get the paper and wanting to buy the plastic beach toys and sweets there. The view down to the beach and to the holiday park; generally agreed to be a blot on the beauty of the seafront. The little hut selling ice-cream, which you had to reach by walking the length of the beach and navigating the prickly detritus of “the other end”. Why was the sand so much hotter at that end of the beach?

Going to the beach meant a walk down a narrow footpath, winding around holiday homes and through the overgrown hillside. One of the homes wasn’t even plumbed in, but had a cesspit in the undergrowth which ponged a bit sometimes. It seemed like a long way to walk as a child, keen to play on the sand, but in adult life, it’s a short stroll. As an unfit teen, a few years before mobile phones, I remember almost passing out after running up the path to get to a phone. An old man slipped and cracked his head on the rocks and I was dispatched to phone the coastguard, who arrived a short while later in a huge yellow helicopter to land on the beach. 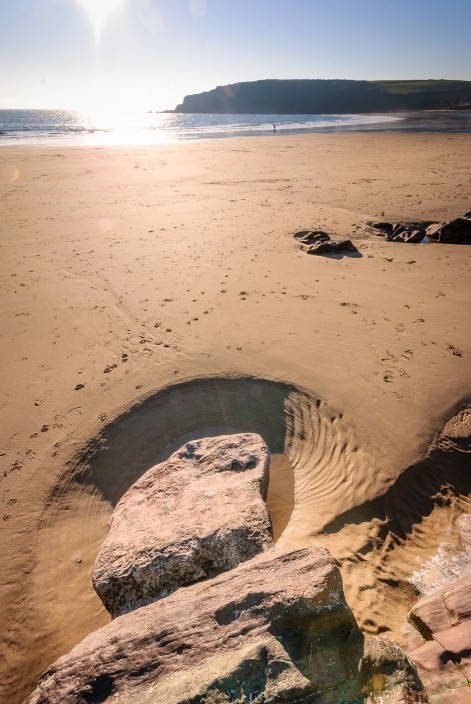 In later years, someone cleared the gully next to the holiday home and Happy Valley was the way to the beach; steeper than the former path and lined with gorse bushes reaching out to stab your legs. There were two ways down to the beach once you reached the local section of the coast path; right and down the “safe” path, or left and a scramble down the rocks. I always chose the scramble, because I knew the safe route down.

Going to the campsite near the holiday park to see if my friend from the previous year was there again, and seeing their family’s Alsatian lying outside their large tent. The big brother, several years older than us, with a proper canoe that I got to take out on the sea.

Playing in the sea with an inflatable dinghy, turning it upside-down and floating in the air pocket beneath. Losing the dinghy when the wind was blowing off-shore and watching it drift away, faster than I could swim to get it back. Playing in inflated tractor-tyre inner tubes despite their rubbery smell; body-surfing when the waves were big enough. Spending all day in the water, until the salt water and churned-up sand had their effect and it was time to get changed.

Later, in the evening, visiting the local pub for dinner and getting to play Pacman on a table-top arcade machine. Driving into the local town to the shops and – if we were really lucky – coinciding with the fish and chip restaurant’s erratic opening times to have dinner there. First stop when we arrived in the town, en route to the holiday cottage, would be the supermarket there: frustrating as a child, but essential to buy two weeks’ worth of supplies.

Living away from the sea all the rest of the year, it was exciting to look out to sea and abide by the local joke. If you couldn’t see the island on the horizon, it was going to rain later; if you could, it was raining now. At night, you could sometimes see the flashes in the sky which you might take to be lightning, but which were proven to be tank cannon fire from the ranges a few miles away. In the distance all along the sea, erratic flashes from lighthouses could be seen if the sky was clear and once, there was a terrific full moon reflecting in the sea.

Childhood plays a hugely formative role in ones later life and my love of the coast stems from childhood holidays. Clean sandy beaches and scrambling across the rocks, sand dunes and rain storms driving across the landscape, distant lighthouses and hillsides covered in little houses and little details are all things which I love.

With hindsight, one of the things which drew me to the home where we now live is how many little details of it are similar to where I spent childhood holidays. Not the mountains, but the sweep of a shore line, the little houses dotted across the hillside, the wild grasses waving in the breeze, the winding lanes, the odd wooden telegraph pole carrying electricity to a house half-hidden. The vast expanse of ever-changing sky and the familiar shapes of rocky outcrops and sloping cliffs and the distant sounds of people playing by the water’s edge.