I don’t usually bother celebrating my birthday in any great fashion, but as I turned forty this year, I decided to make an exception and plan a short break away with Jo, so that I could look back on the arrival of mid-life with some fondness. After some to-ing and fro-ing on a destination, I finally decided on the Lake District in the north of England, which was a photographic destination in my youth and one which Jo and I returned to during our honeymoon.

For some reason, the older I get, the more active I seem to be: from lazier younger years, when I’d get the car as close to a view as possible before getting out and taking my photos, I am ever keener to don thermal underwear and an waterproof outer layer to head up into the hills. Last time Jo and I really had the chance to do so in the Lake District was during a one-day stop-over during our 2010 road trip, when we inadvertently scaled Catbells: one of the more well-known of the Lakeland fells. The trip I planned in January only had two goals definitely on the list: the hotel in which we would stay, our favourite in England; and that I wanted to bag another of Wainwright’s fells on my birthday. 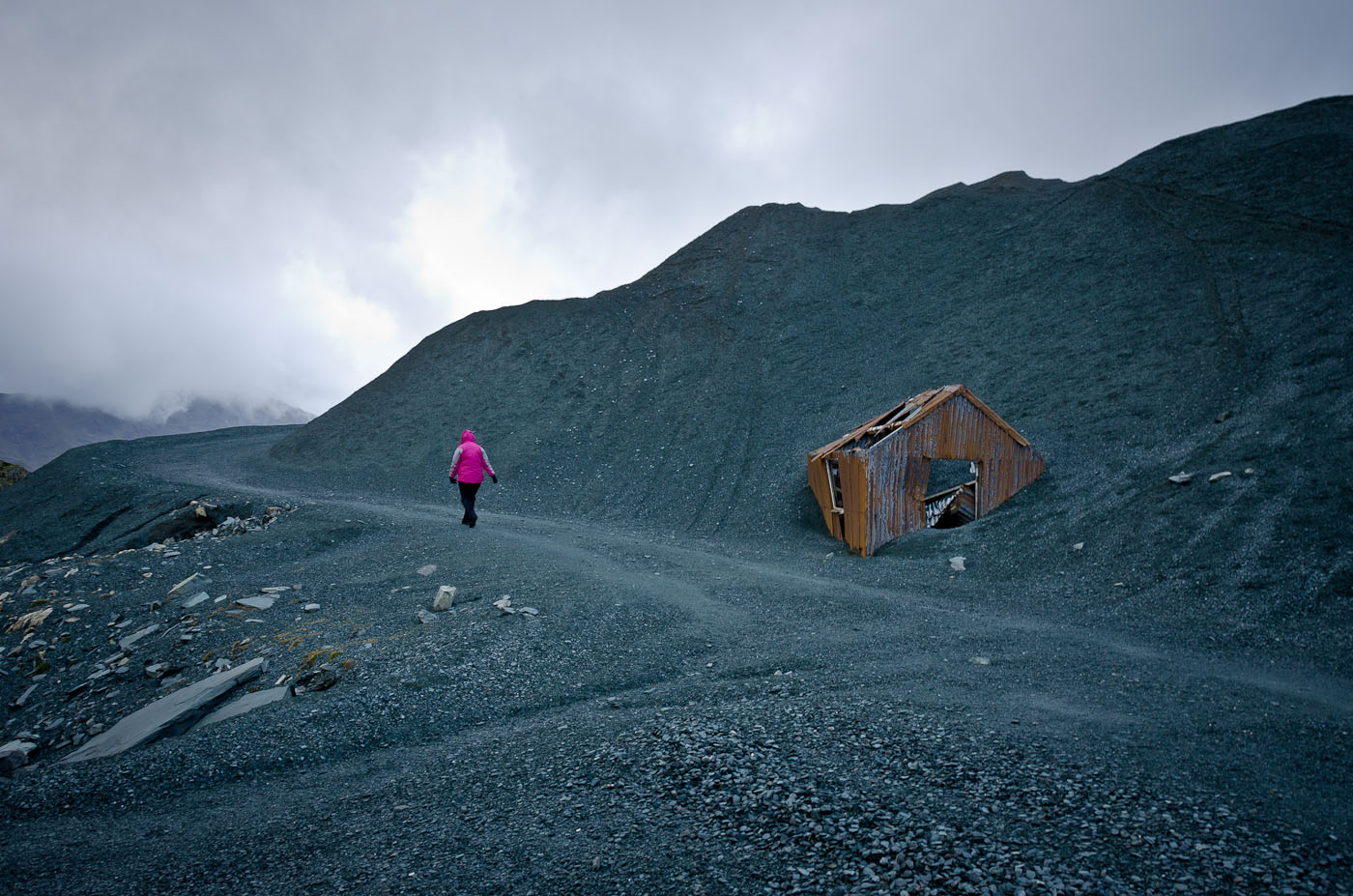 After consulting the Wainwright Guides at some length – an early birthday gift from my parents – we settled on a route which would, in fact, take in both Fleetwith Pike and Haystacks, according to the state of the weather and the state of our leg muscles. Despite the inclement weather and moderately strong winds, we headed for the Buttermere valley and after parking at the remote and almost deserted Honister Slate Mine, we slogged up the most tiring part of the walk; the steep, winding path leading up to the lower reaches of Fleetwith Pike. As we breasted the hill, we passed through the remnants of a fairly extensive slate dump spread across the hillside, which dates back at least to the 18th century. From there, we gathered our bearings and decided, based on the weather and continuing wind, to bypass Fleetwith Pike and strike out towards Haystacks: Wainwright’s favourite fell and the one at which his ashes were scattered after his death in 1991. 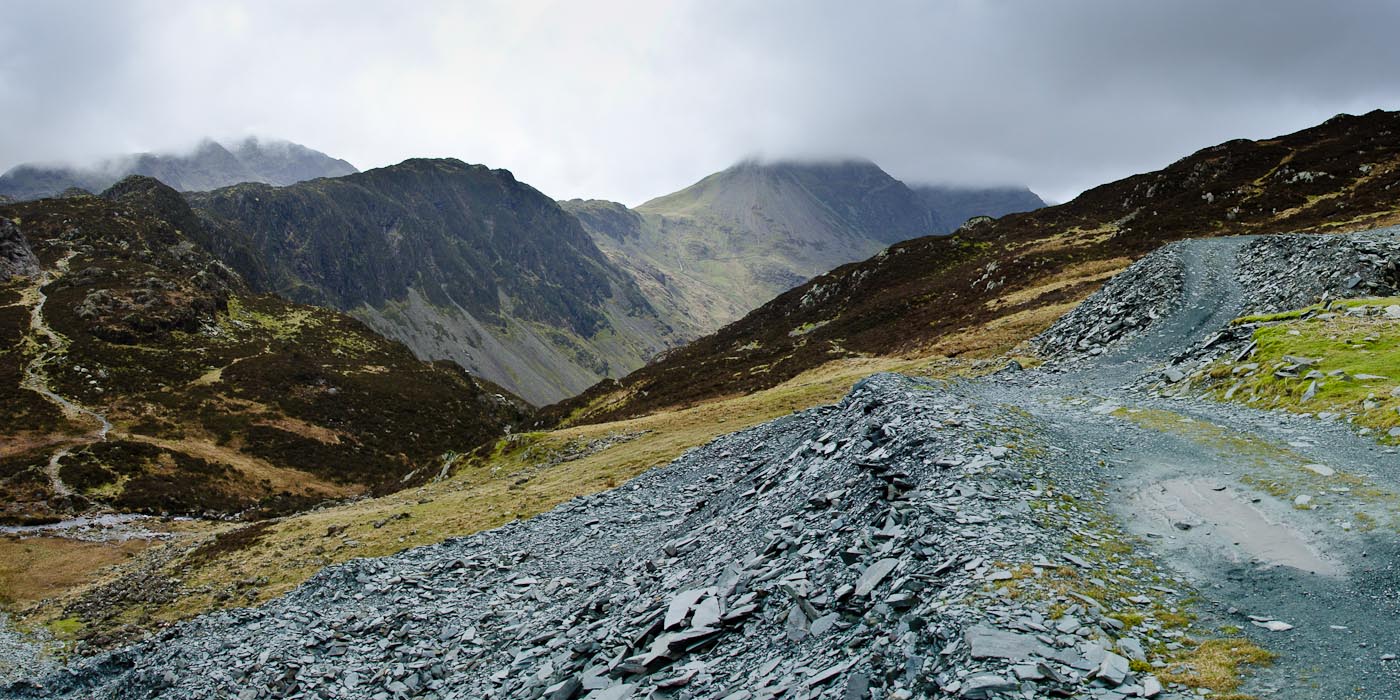 As we walked on towards our final goal – the darker section of hillside on the middle left of the photo above – the weather gradually began to close in a little, and by the time we’d descended to cross the stream below Dubs Quarry and scaled the first part of the path towards Green Crag, we realized that it would be safer to abandon our goal and bear away from the ridge to head along a flatter path back to the car. We’ve experienced enough mountain weather to know not to risk going too far when the weather conditions are so changeable. Whilst we’d probably have continued if we had more time and better gear, we decided to leave the truly adventurous walk for when we have more experience. 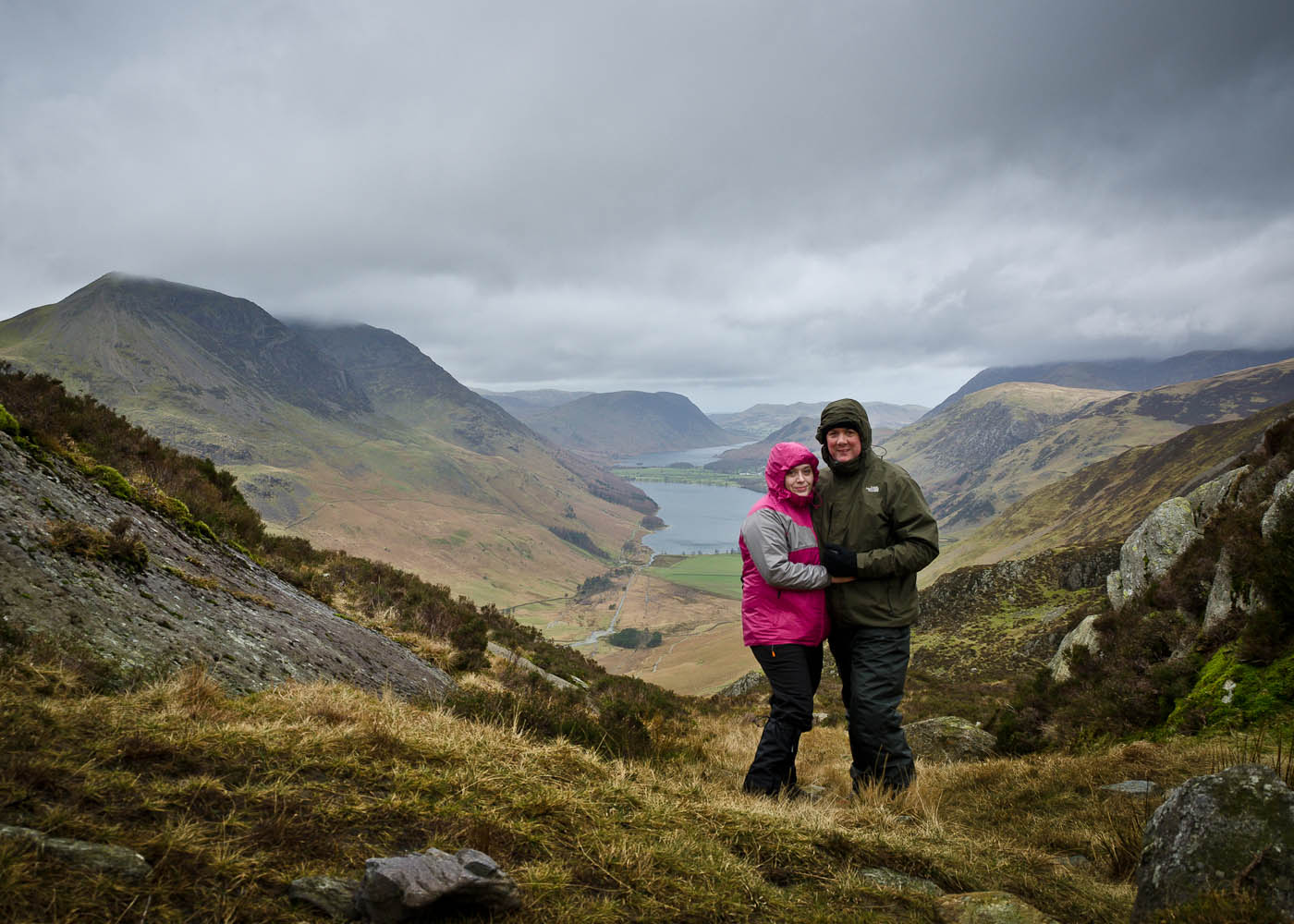 We stopped for a lunch break below the rocky outcrop of Green Crag and enjoyed the view; the best one looking down into the Buttermere valley over the lakes of Buttermere itself and Crummock Water. An interesting note, being that we live near Interlaken: the plain between the two lakes is actually debris and silt, which has collected over a great many years to seperate what once was one large body of water. Just the same as the original huge lake which became separated over time to form the lakes of Brienz and Thun! In Switzerland, the plain contains the small city of Interlaken, whilst in the Buttermere valley, the plain now hosts the village of Buttermere itself. 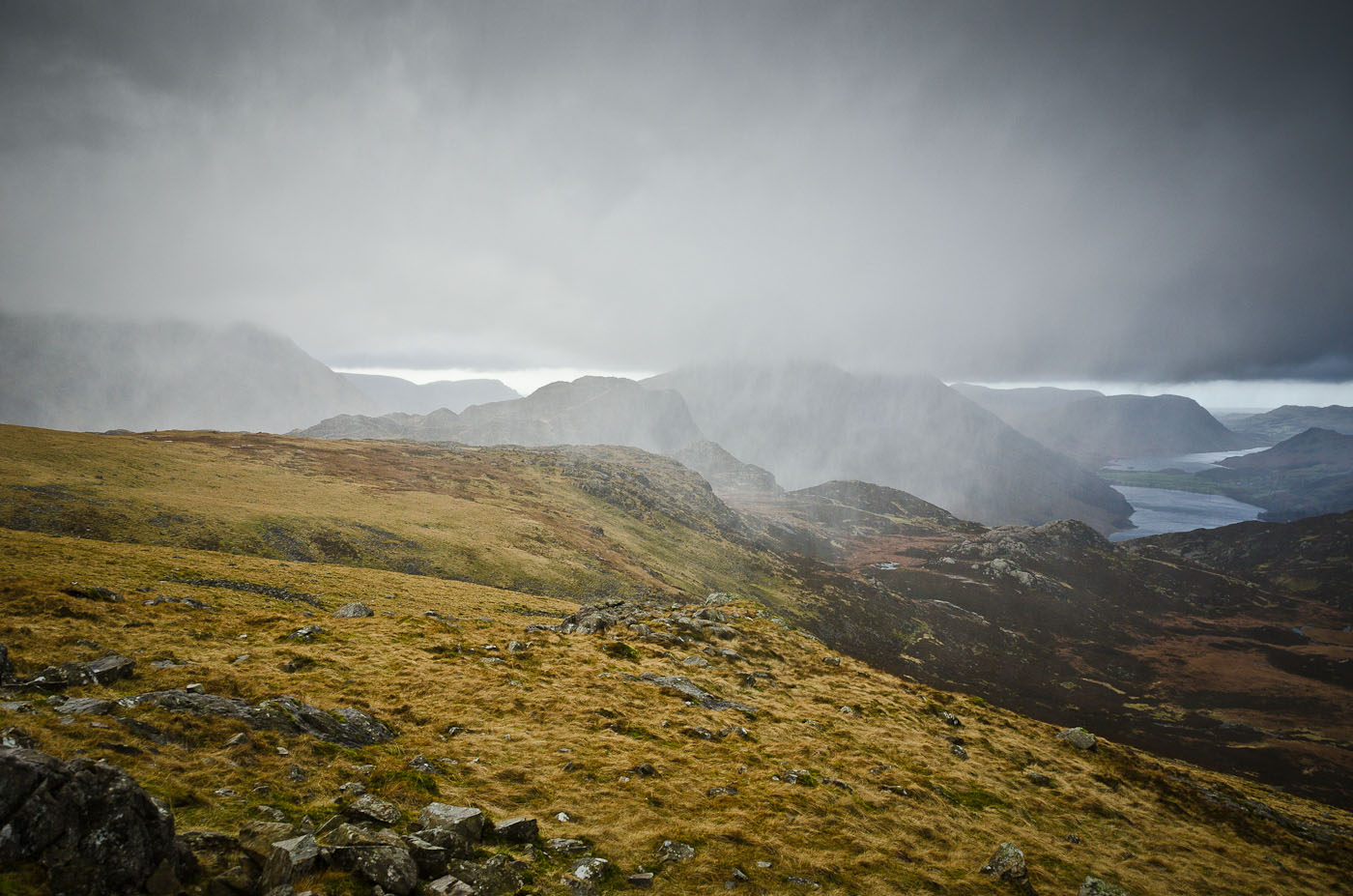 Back to the walk, and replenished with sandwiches and chocolate, we headed upwards across moorland to the easier path back towards the Honister Pass, and as we trudged through the impending gloom, we realized that we’d made the best decision. Hailstones arrived en masse and began pelting us hard; yelps aplenty as they struck our chilled faces painfully, when we turned our heads even slightly into the wind. After a distinctly uncomfortable twenty minutes or so, we made the path we’d been aiming for and gratefully turned our backs on the wind and hail, thanking our waterproof clothing for the protection and warmth it was affording us. A short break in the shade of a rocky outcrop between flurries allowed me a moment to get the camera out to photograph what we’d been walking through, before we returned to the path – sodden enough that it had become spongy despite the gravelly base layer – and headed back to where we’d descend and return to the car. 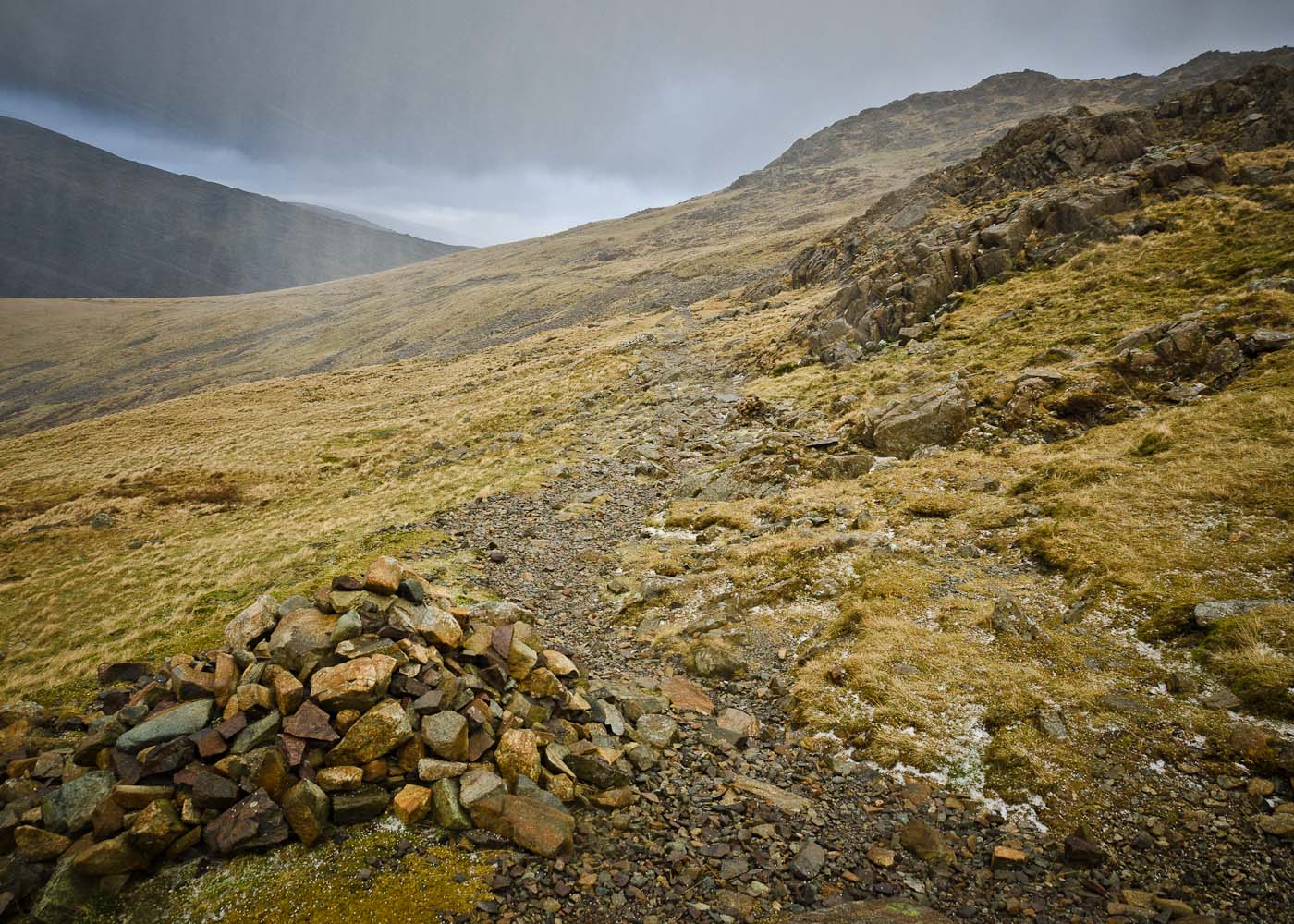 The most tiring part of an afternoon’s hike in the hills is always the worst: the downhill trudge with aching muscles. And so it was this time, where the interesting history of the arrow-straight path leading down to the valley floor – it used to be the track for a funicular leading between the slate mine and the hilltop – didn’t make the last leg any easier. Back at the mine, we collapsed gratefully out of the wind into the blessedly still and quiet car interior and began making our way back to the hotel with happy memories. Despite the effort and discomfort, we love experiences like these and look forward to experiencing more of them.

Although, hopefully, with less hail next time. 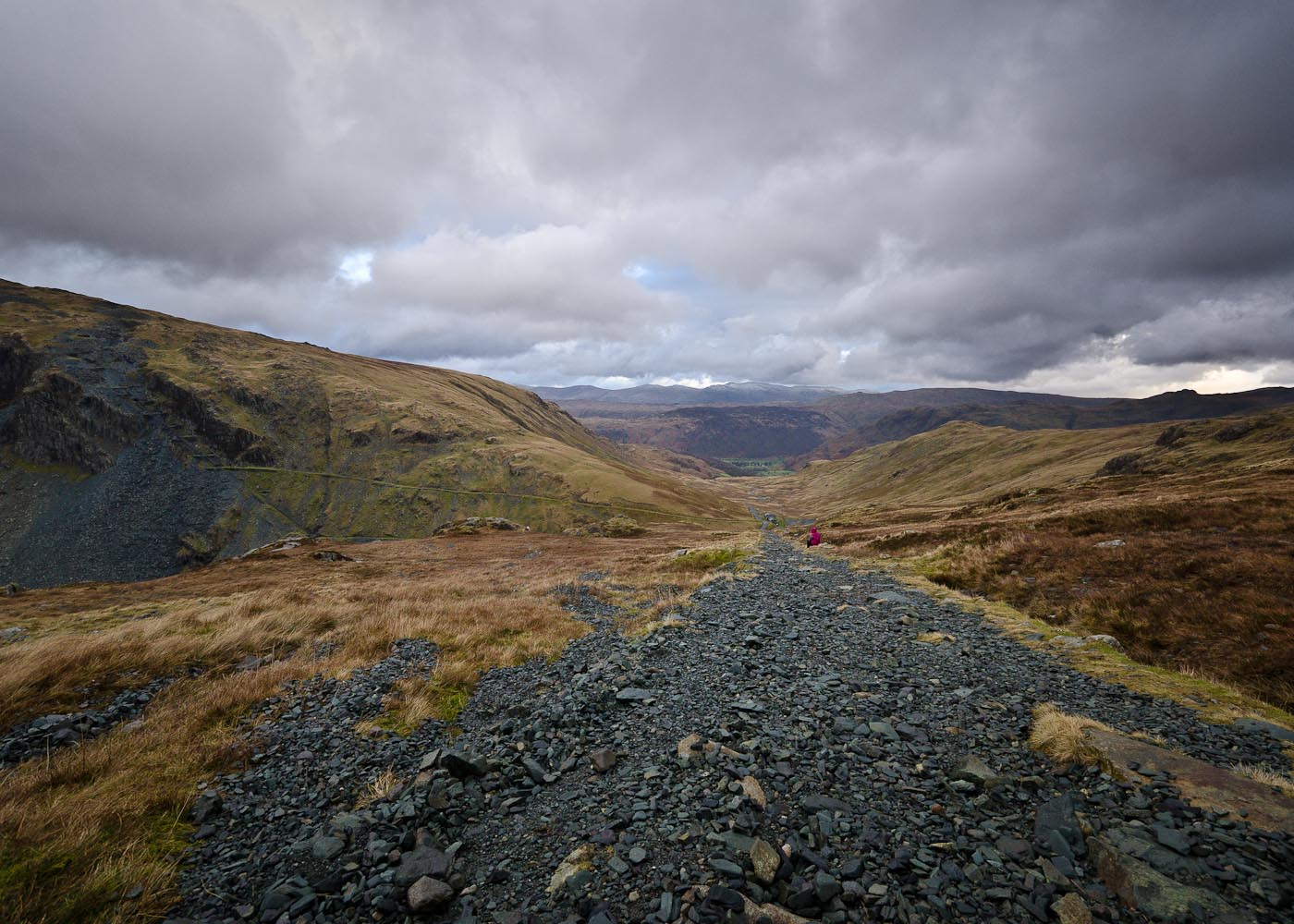 There are 3 comments for this entry.