I’ve long been an aficionado of over-dimensional photographs; in fact, even when I was still using film cameras, I’d take loads of photos of a scene and stick the resultant prints together using Sellotape on the reverse. Since moving into the world of digital photography, though, things have progressed and I’ve learned over the past ten years to get the best results from a camera and automating “stitching” programmes. With the acquisition of Photoshop CS3 a couple of years ago, I stopped using dedicated software and started using the Adobe solution for my usual wide panoramic shots, compiled of 3-4 individual photos.

When I wanted to know a little more about the modern solutions and software for creating 360° panoramic images and “mini planets“, I thought I’d ask my friend Habi, as he posts such images to his Flickr stream relatively regularly. The resultant hour-long re-introduction was of great help and although the resultant quick panorama I made with him wasn’t anything to write home about, I’ve since had the opportunity to try a couple more times; both times with better results.

The main gripe I have with using Photoshop to make very large panoramas from very high quality, 16 megapixel originals is that the programme (or my rattling MacBook Pro) can’t handle the stitching process for more than half a dozen photos at a time. However, Habi suggested I try the open source software Hugin instead. I’d heard of it a while ago and it seemed that there were many restrictions and complications when using it; despite being a computer-friendly person, I still prefer to use software with easy to use workflows and step-by-step, button-led processes. The software (which can be downloaded from Sourceforge and used directly via an up-to-date GUI) is now well up to the task of taking on my panorama generation, as it’s used by keen amateurs and professionals alike.

The image accompanying this article, of the world-famous Matterhorn, was compiled from 16 full resolution 16 megapixel JPG images, and where a previous attempt using Photoshop crashed the software three times, the generation using Hugin took 4 minutes and no requirement whatever for re-editing. The image below is a crop at 100% of the valley to the lower right of the Matterhorn, to show the level of detail in the final image. 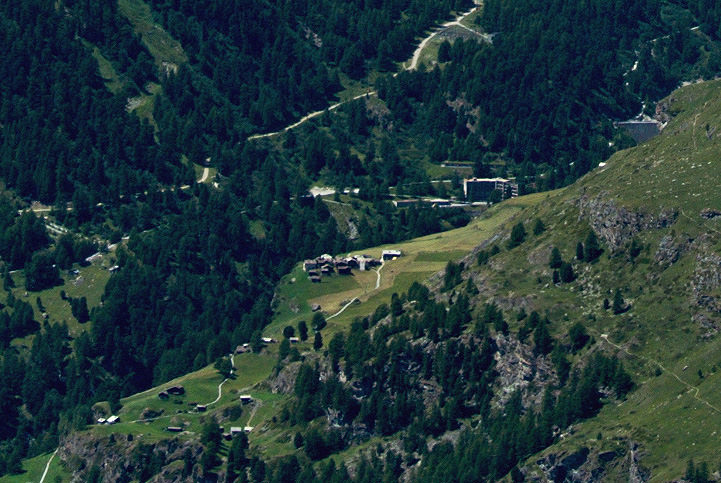