The Royal Wedding on a budget

2nd March saw the launch of the new dedicated website for the (British) Royal Wedding, which will be taking place at the end of April. When I saw that it was being released, I wondered how the Prince of Wales’ office would present the wedding online, given that it’s the first since the Monarchy embraced the online world for the first time and, amongst other things, started to used social media channels such as YouTube, Twitter and Facebook. I hoped that it would be a smooth and professional website, with large images alongside the detail and quality one would expect from one of the richest families in Britain. 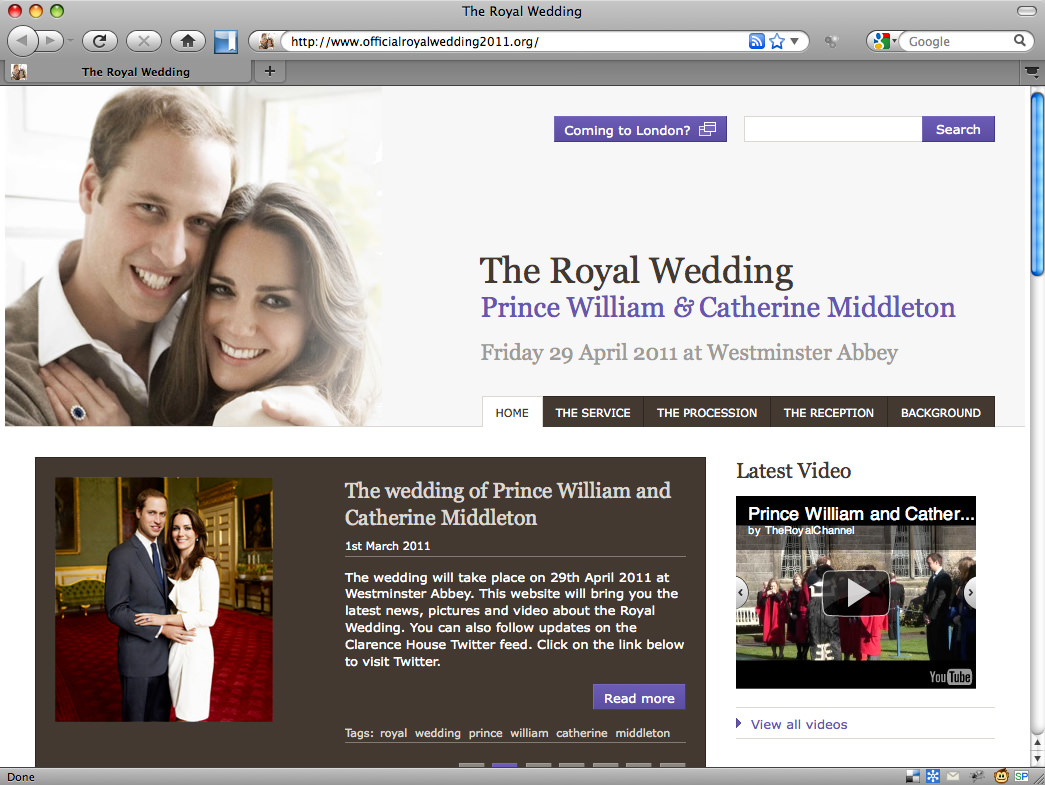 However, the website, apparently produced in collaboration with global consultancy Accenture, is an abysmal attempt to bring the event to the web using an awful generic design, a hotch-potch of blog entries, and the unimaginative use of social media channel plugins. The core of the site is touted as making use of the Google App Engine, no doubt taking advantage of the massive scalability of the Google server farms to ensure reliable service; even the images are hot-linked directly from Flickr, notably omitting the link back to the original Flickr page and flouting the community guidelines and terms of service which state that the Flickr service is “intended for members to share original photos and video that they themselves have created”.

The Flickr account for the Royal Wedding – presumably set up for use in connection with the website – is also shoddily set up; not even the dedicated web URL part of the address has been defined, with the channel itself containing photos with such titles as “wabbey_8_test_2” and a distinct lack of photo tags or group participation. Imagine for a moment, that you were the future King or Queen of England and that Mario Testino had taken your portrait: would you want the photos presented to the world on a glorious, clear and modern website, or stuck on Flickr without a proper title or description, then hotlinked to a bodged blog-based website?

This new website is a prime example of how modern websites are created with a worrying lack of attention to detail, a reliance on “trendy” third party services and channels, and more attention paid to the speed of getting the site online than the visual and perceptional impact, usability and overall quality. Examples of such problematic inter-reliance of websites over the past couple of years – where the unavailability of services such as Twitter and Facebook have laid entire sections of the web lame – ruin the integrity and responsibility of the web design and production industry. A recent example I heard of saw an international company claiming that a budget of £12,000 was “far too expensive for a company website“: this response is sadly becoming more and more common, after the result of inexperienced client advisors and marketeers selling websites and online solutions based on the fact that creating a “page” on Facebook or a Twitter stream is easy and inexpensive.

The actual requirement for many companies, organizations and events is for a dedicated, stand-alone website, which certainly integrates the now ubiquitous sharing tools and allows visitors to quickly and easily make their online friends aware of the site. However, as I wrote last year, any respectable web agency or individual in our field has the responsibility to ensure that the client realises what is most important, and to provide them with what they need. The website for the Royal Wedding deserved so much more than a slap-dash attempt at a website: after all, it’s a online representation of a historic event in the life of a nation.

It would interest me greatly to know what kind of budget the agency quoted for setting up the site; after all, even the most vaguely pro-Monarchist British web designer (such as myself) would probably have been delighted to provide his or her future King with a website for his wedding at little or no charge, merely for the privilege alone. It’s interesting to see the difference between the professional-standard (although outdated) websites for the Prince of Wales and for the Monarchy itself, and this new website, and to question why there is such a league of difference in quality between them.