My sister Sarah, ever the publicist, chose to set up a blog when she was diagnosed with inflammatory breast cancer in 2009. She told us that the reason for the blog was manifold: to allow her to vent her positive and negative feelings; to help her to let her many friends and family keep up to date; and to provide a reference to which other people affected by the disease could refer both while she was here and after she had passed away, should the worst come to the worst. As I wrote last year, the worst did come to the worst and Sarah passed away in Poole Hospital on 19th March 2010, after contracting pneumonia.

As I typed the title for this entry, I realized that it has a double meaning. Her blog, which I still can’t bring myself to read in full, is touching and funny at the same time. A truer written image of my sister would be hard to achieve, from her approach to her battle with “Mr. Frodo” (as she called her cancer) to the touching and funny posts she wrote in up-beat moments. This is the first time I’ve written about her in public since she died and I never will write much. There are so many words, but they don’t belong in public. The only memorial I will compose to her is my only resolution for 2011: a small collection of my photographs of her, which I will share one day.

At some point in the near future, I will delete the original at wordpress.com, so please share this new link with anyone you know who might be glad to know of the change. 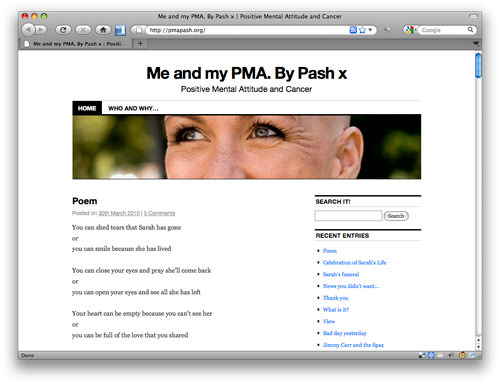