My family were very generous at Christmas and for my birthday, by helping me to get some cash together to buy new camera equipment. Jo gave me the lens which has been top of my list for some time now, which I discovered whilst looking for more expensive toys: the Nikon 35mm f/1.8 DX. This has instantly become my favourite lens and it’s very likely that this new lens will see a huge amount of outings over the coming years.

The DX range of Nikon cameras – such as my D80 – have smaller sensors than the more expensive pro-level FX (“full frame”) cameras. On FX cameras, the digital sensor which captures the image is approximately the same size as the film window on a standard 35mm film camera: 36mm x 24mm. The DX camera sensor is classed APS-C at 24mm x 16mm, which means that it is effectively 1.5 times smaller than FX cameras.

Here’s an illustration to demonstrate the difference: I photographed this scene using a standard 50mm lens on a regular film camera a few weeks ago, and the red outline shows what the camera would’ve seen using the same lens on a DX camera. 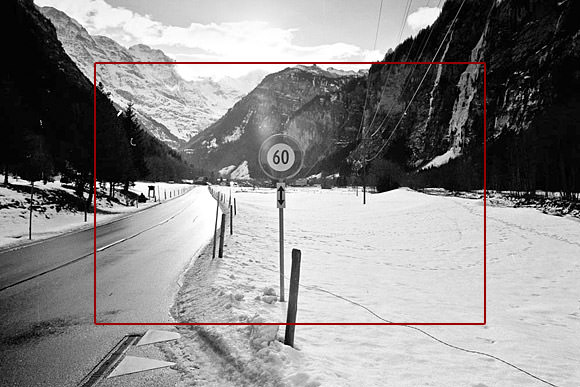 As you can see, there’s quite a difference. The angle of view is the same, but the scene coming through the lens and onto the sensor is cropped on all four sides. This means that effectively, using a 50mm lens on a DX camera will produce the same image as a 75mm telephoto lens on an FX camera.

My street photography is one of my passions and until gaining my new lens, I have always shot using a 24mm lens. Thanks to the crop factor, this has produced photos which are a slight wide-angle view, equating to the view of a 36mm lens on an FX camera. This means that to gain focused detail on a subject, I’ve had to get in fairly close: often resulting in them seeing the camera and either changing what made them photographable, or avoiding being photographed. This has guided my street photography to a fair extent and it’s often been a hit-and-miss affair, whether the subject will react or not. There’s also the disadvantage of an increased depth of field inherent to wide-angle lenses, meaning that shots such as the first one below, whilst photographed with a wide aperture to get as shallow a depth of field as possible, still show relatively sharp detail in the background.

Compare the depth of field in the photo above with an equivalent with my new lens, which clearly illustrates the difference.

I have been reviewing various options for a new camera over the past few weeks and whilst looking at “Micro Four Thirds” cameras – more about them in a future post – I noticed the Sigma 30mm F/1.4 lens in a display case for an affordable price. I immediately made the connection that this lens on a DX camera would equate to 45mm: almost the standard 50mm lens which I used almost exclusively in my early photographic days. Although affordable, it’s not a cheap lens and so I bade my time and read an online review later, to confirm that it was what I wanted. The review, at Ken Rockwell’s well-known equipment review website, included one sentence which led me to buy the Nikon lens I now have:

If you shoot Nikon, forget this dumpily-made Sigma and get the newest Nikon 35mm f/1.8 for half the price.

After a quick check at Swiss price comparison website toppreise.ch, I saw that Ken’s review was indeed accurate: the Nikon lens, which would be almost definitely sharper than the Sigma equivalent, was indeed considerably cheaper. It also works out to be the equivalent of a 52mm lens on an FX camera, thereby most closely matching the 50mm lens I had hoped for. Thanks to a next day delivery from my preferred supplier Heiniger AG, I received the new lens in time for my birthday and I made a first full test run with the lens at Dalhölzli Animal Park this past weekend.

The lens helped me to produce some really good shots, showing how quickly and quietly the lens focuses under the kind of flat lighting conditions so often encountered on city streets. Although I have to stand a little further away from the subjects now – something which will take a little practice – the feeling achieved by using this fixed, wide-aperture lens is the same as that I used to feel with my old film cameras. A simple, comparatively small camera with an discreet, short lens mounted on the front draws little attention from others nearby. The lens allows me to step back a little from the subject and therefore be less conspicuous; something which will hopefully allow me to get more natural candid shots. I’m also looking forward to using the lens for portraits, starting with the first session of 2011 this coming weekend.