Where Toblerone comes from*

A recent blog post by fellow Brit abroad Diccon Bewes prompted me to head out into the city again with my camera, for the first time in a while. My goal for the lunchtime trip was a university building to the north of the railway tracks; a blue-painted building in the style common throughout the city, which dates to the very end of the nineteenth century.

One comes across such gems when travelling around the thoroughfares of Switzerland’s capital; my ongoing photographic project themed on the city’s tram and bus stops is continuing and has given me not just a better understanding of the city’s geographic layout, but also of its history and development. Call this a personal “Knowledge” training, if you will, after the London black cab drivers’ exhaustive preparation. 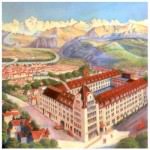 The building I photographed today is the Unitobler building, named for its original and for its current purposes; latterly, the building has been used as part of the city university. But until the 1980s, it was the factory where Toblerone chocolate was produced. The illustration on the right shows an idealised view of the factory perched above Bern and the distant alpine panorama; a view which evokes a wonderful feeling but which sadly bears little resemblence to the actual location. Just as is the case for fictional chocolatier Willy Wonka, the Bern factory is the sole source of the company’s chocolate and founder Theodor Tobler was atypical and progressive in his views and plans.

You can read more of the history of the Tobler family and the world-famous chocolate on the Swiss Watching and Toblerone websites. However, here’s an quick, interesting nugget of information: it’s often claimed that the triangular shape of the bar is a reflection of the pyramidal Matterhorn mountain on the wrapper; but the mountain has only appeared on packaging during the last ten years!

*Production was moved out of the city to the nearby Brünnen district in the mid 1980s.

5 responses to “Where Toblerone comes from*”