All posts, Technique
From the series Strobist

A friend asked me today about diffused lighting, after seeing my test shots with the Helios diffuser earlier in the week. His question was how to get the lovely soft light you can see in the test shots (particularly this one), but without filling the entire space with light. So, the goal is to get soft light, but in a confined, directional way.

I gave my brain a little exercise and came up with the solution, which has been based on smaller scale equipment. (The setup in question was actually for a large softbox, which makes the solution a little more difficult to set up in practice.) Due to the lack of suitable equipment, I’ve laid out the explanation on paper, instead of setting it up in the studio.

The soft light we’re striving for is created by a large, diffused light source. In this case, the front panel of the softbox is what creates this diffused lightsource. The larger the front panel, the softer the light. However, diffuse the light using such a large panel and the light goes all over the place: nto just tidily forwards towards the subject, but also sideways, upwards and downwards. Imagine a great big lightbulb: the ones with the opaque glass. Wonderful soft light, but light which fills the space it’s in.

So, how to keep the diffused light, but stop it from spilling all over the place. The answer isn’t as complicated as you might think: all you have to do is think literally: stop the light from falling to one side of the subject or another by using shades, or what many people will know as “barn doors”. If you’ve ever been to a theatre, you’ll’ve seen these things mounted on the stage lights, directing the light precisely where it’s supposed to go.

If you have these “barn doors” – or a hand-made variation, using bits of cardboard – then you’ll find that the light is now much more focused, casting shadows where they are blocking out the light. The edges of the shadows will be quite soft, as the shadow isn’t being cast from a single spot light source, but from the whole softbox area. Check out the hand-drawn diagramme at the bottom of this article to see what I mean: the light won’t be cut off with a hard-edged shadow, but will fade gently between light and dark. Using simple geometrical logic, adding a longer barn door edge to the light will change the angle of the falloff area, making it narrower and narrower. The logic of the geometry indicates that the narrower the beam (i.e. the longer the barn doors), the harder the edge of the shadow will be. That’s why the barn doors in theatre situations are relatively short; to avoid hard-edged shadows wherever possible. In order to ensure that the barn doors are as efficient as possible, they should be black, so that light cast onto the inside of them by the softbox isn’t reflected out sideways.

After I’d made the suggestion of adding barn doors to a softbox to my friend, he came back with the feedback that this had made the light falling on the subject harder and less diffuse. This will be a side-effect of adding the barn doors but not through any effect that they’re having on the light coming directly from the softbox. If you think about how much light is spilling around the room in the example I linked to earlier, you’ll quickly realize that this light will bounce off the surroundings and reflect back onto the subject. If the room has light coloured walls, this reflected light will add to the soft light cast directly by the softbox and make it even more soft, filling any remaining shadows. In fact, _all_ of the light on the right shadow side of my face in the linked photo above is entirely reflected light from the white window frames on the right edge of the picture.

By blocking the softbox light into a more concentrated beam, this reflected light will be eliminated and the end result will be slightly less soft than the version where light is spilling all over the room. To counteract this loss in light in shadow areas, and apparent loss of softness, you can add a second light on very low power on the other side of the camera, to add just a dash of light back into the shadows. This use of a secondary, very diffused and very low power light to add detail to the shadow areas is a technique which I learned directly from the master himself, David Hobby, when I was at a Strobist workshop in Geneva last year. 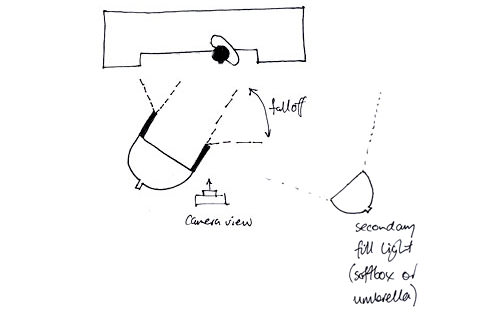