The work together between Permanent Tourist and Bern band Choo Choo goes back to August 2008, when we spent the day taking photos in the woods at Dalhölzli (ruining the peace with a noisy generator and lots of smoke), in the seclusion of the Kornhauskeller restaurant, and in the back lanes of the old city. Since then, I’ve shot the band on several occasions, both as portrait sessions and on stage.

Choo Choo are helping their record label Subversiv celebrate its fifteenth anniversary this weekend by playing a gig at the Wasserwerk Club; just a few steps from where we created one of my most popular shots of this year, “The Bassist Gets It“. Jo and I hope to be there and once more enjoy the great atmosphere of a Choo Choo gig. It’s also been a great honour that the band have chosen one of my photos to appear alongside the advance article in national Swiss commuter paper 20 Minuten. 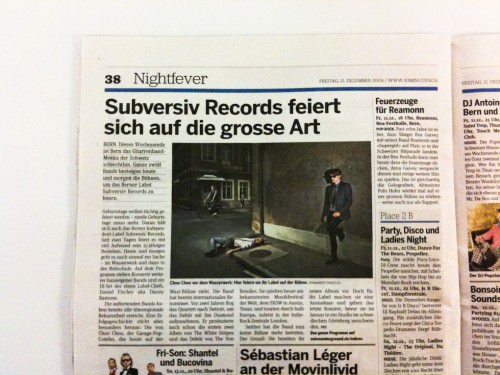