Strobism in the old city of Bern

All posts, Technique
From the series Strobist

I’ll be photographing a band in Bern at the end of next week with a couple of friends and so Jo and I headed to Bern last weekend to scout out some locations. We headed for the lower, older part of the city below Kornhausplatz and wandered down through Rathausgasse, stopping off at St. Peter and Paul and then on down through Postgasse to the area of the Berner “Matte” (meadow, though it’s an ancient built-up part of the city) and “Nydegg” (low corner) below the comparatively modern Nydegg bridge. This part of Bern is the oldest part of the city and is full of timbered buildings, which have survived well despite regular flooding. (Not least, during the “century floods” of 2005.)

We found the Ländtetor (landing gate), a thirteenth century stone archway to a small platform next to the river, long since covered over by slightly newer buildings. The stone gate was one of the entry points and stopping places of the ferry on the river Aare, supplanted around 1256 by the original wooden Untertorbrücke (“Lower Gate Bridge”).

I thought that the preparation of this photograph would serve as a good example of strobist technique. On first entering the platform I took a look around and saw that it would be just the spot for a moody image, which would be set off perfectly by Jo’s pristine white dress. I took a couple of shots from different angles, partially to show my friends the place in advance of the photo shoot next week, and partially for this “how-to” article.

Firstly, I had to find the right angle to hide the graffiti which is unfortunately quite common, even in such historic areas of the city, and choose the direction in which to shoot through the arch (as that was the image I was looking for).

Although the bright sunlight through the archway and reflecting off the river was good enough to create a nice effect, it wasn’t quite strong enough to fill in the shadows. These were quite dark once I’d taken the highlight caused by direct sunlight on the cobbles in the centre of the picture, so it was time to break out the flashguns. Without them, this was the effect of just natural light: 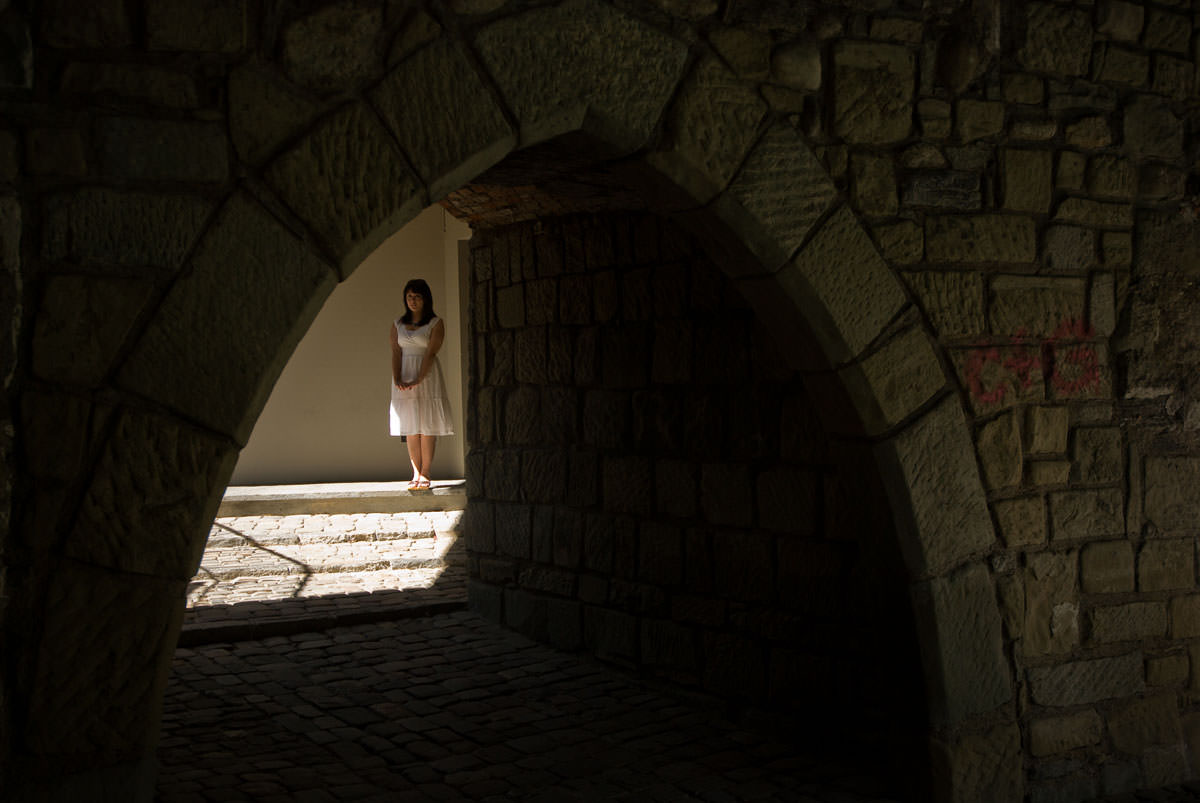 Direct flash would’ve been too much, so I used the pale wall to one side of the archway to reflect a soft light back in from the right. I then placed a diffused flashgun on very low power just inside the archway, pointing to the top left of the arch from the camera angle. That made just the smallest amount of difference to the inside of the arch, bringing out a slight amount of detail, without overpowering the shadows completely. The final result is at the top of this blog post, perfected with just a little Photoshop editing to remove as much of a pink piece of graffiti on the right of the image as possible. (A final note for perfectionists: I would’ve asked Jo to stand a footstep to her right, but she was conveniently blocking out a grill on the wall behind her!)